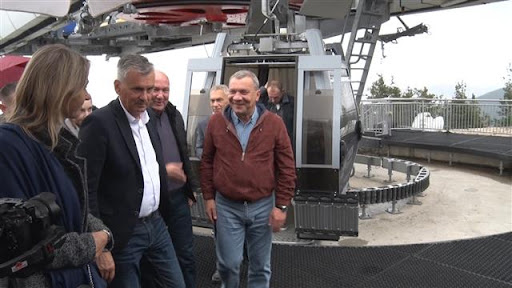 On October 6th, the Gold Gondola hosted a high delegation of the Russian Federation led by Deputy Prime Minister of Russia Yuri Borisov. In addition to a high-ranking official from Russia, the delegation also included the Minister of Innovation and Technological Development Nenad Popovic, as well as the Russian Ambassador to the Republic of Serbia Alexander Bocan Kharchenko.

The delegation that will participate in the 19th session of the International Serbian-Russian Committee for Trade, Economic and Scientific-Technical Cooperation a day later, had the opportunity to see the tourist potential and natural beauties of the Zlatibor district, as well as enjoy the gastronomic specialties of our region.

As always, the Zlatibor gondola is an unavoidable attraction during every visit to Zlatibor. With adequate security measures, which we are used to when it comes to visits at this level, the guests from Russia went to the highest peak of Zlatibor - Tornik in the presence of a large number of journalists from all major media in Serbia, who followed this visit with great attention.

As a reminder, the Municipality of Cajetina, six years ago, established the first, and for now the only, regional Office for Cooperation with Russia, as a type of service for businessmen from the Zlatibor district for their more organized appearance on the Russian market.