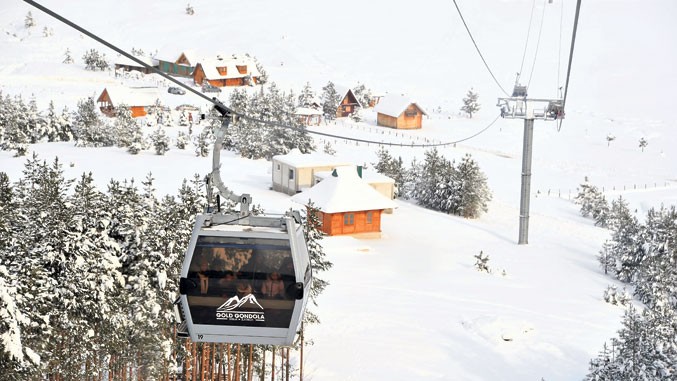 The interest of Zlatibor tourists in the "Gold Gondola" ride exceeds expectations. At the departure station in the center of this tourist place, from where the gondolas go to the top of Tornik about 30 minutes of ride), there are lines of people who have been patiently waiting to ride the longest panoramic cable car in the world every day since the grand opening (January 14th).

The “Gold gondola” attracts young and old, families with children, skiers, lovers of views from above. Every day, the number of its passengers is more than a thousand, and that brings good earnings (the price of a ticket is 1000 for adults and 550 dinars for children 550). According to the data of the PE "Gold Gondola Zlatibor", in less than half a month of operation of the panoramic cable car, about 16,000 people enjoyed its ride.

These days among the passengers of the “Gold gondola” were two  foreign ambassadors. On the occasion of its opening, the ambassadors of Egypt and the Czech Republic in Serbia, Amr Alguvejli and Tomas Kuhta, visited Zlatibor. They rode a panoramic cable car, stayed at the "Tornik" Ski Center, and the Tourist Organization of Zlatibor organized trips for these diplomats to Stopića Cave and Gostilje Waterfalls.

According to the website of Tourist Organization of Zlatibor, Ambassador Kuhta stated that Serbia has excellent potentials for tourism and it is very brave that investments have continued in these times of pandemic. According to the Egyptian ambassador, his country traditionally has sincere and friendly relations with Serbia: - Last year, Egypt participated in the Belgrade Tourism Fair for the first time as a partner country and will continue to implement ambitious plans when it comes to tourism expansion - said Ambassador Alguvejli. Communication and proposals for cooperation of Egyptian investors with the municipality of Cajetina in the field of health care, which includes the center "Cigota" and similar specialized wellness centers in Sinai.